Some of my regular readers may be wondering why I took a break from my regularly scheduled programming to discuss how Reebok hates children.

The source of the image is CrossFit Apex. Apparently one of their trainers thought it was a cool thing to do and then crossfit.com, the owner of the brand name, posted a link to it, presumably because they thought it was cool. I don't think it's cool. CrossFit.com has recently entered into a partnership with Reebok (note the banner) and I don't think Reebok thinks it's cool. So I encourage people to write to Reebok (corporate@reebok.com) and let them know what they're supporting. Legitimate lulz involved.

CrossFit.com is, of course, a bit of a joke to thinking people because of their pompous rhetoric1, general douchebaggery, cult-like followers, and inevitable results (injuries, burnout, subpar performance). Take, for instance, an amusing take-down of their pompous claims that "We got the science" and it will "dwarf anything ever conceived of in Framingham or Harvard Nurses". LOLWHAT.

Anyway, so I posted that for my own personal amusement. Perhaps it will ruin somebody's day. But it will make so many other people's days so much better because a reckless and dangerous corporation may lose some marketing dollars or be recognized as the purveyors of batty insanity that they are.

NOTE: CrossFit.com originally had a link to the guy's website on that page. They also said that they don't "unpublish", so they would keep the picture up. However, they've taken down the link, which is why I provided a link to http://www.crossfitapex.com.

1: This does not need a footnote, really, but here's a canonical quote demonstrating their self-delusion: "We can take you from a 200-pound max deadlift to a 500-750 pound max deadlift in two years while only pulling max singles four or five times a year." No, they can't.

EDIT: This is rather amusing, more amusing if you're familiar with the dysfunctional circus that is CrossFit (which I barely am, mostly out of a mild curiosity toward them not unlike my mild curiosity about anti-vaccine advocates, Mercola followers, 9/11 Truthers, etc): http://www.forgingelitesarcasm.com/2011/08/babies-need-to-harden-the-fuck-up-2.html
Posted by Mr. G. Z. T. at 19.8.11 No comments: 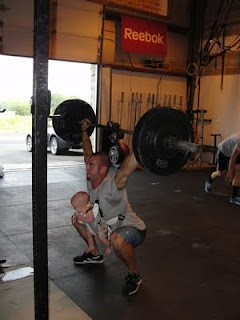 What's going on in Blogoslavia

That is my cute name for the Orthodox web-log-o-sphere. I've been trying to make it a "thing" for a while, but it hasn't caught on.

Answer: mostly just a bunch of wankers talking about stuff. Apparently "homosexuality" is a big "thing" right now. An extremely polarized "thing" - which is to be expected. It's also extremely political, and explicitly so in the treatment of one side. This has the unfortunate side effect of allowing the treatment of those outside your bloc as a monolith without nuance and declining to hear anything they say. Of course, that right there is a characterization which you may not agree with. Fortunately for us all, the people that actually matter, for the most part, are not the ones spewing crap on web-logs. Some, unfortunately, seem to have some influence (AOI and its ilk, though, of course, they would claim that certain other groups they don't like have some influence, perhaps).

All I would say is that people should be careful of the rhetoric they use and not be dickheads. And ignore anything coming out of AOI and its constellations.

As a result of this, I've actually started posting on some forum or other. Intriguing. Some people are apparently very tightly wound and likely insane, and I say this not necessarily on the basis of discussions of this topic.

EDIT: Unlike, it seems, some of the AOI/Monomakhos/etc people, I approve of Metropolitan Jonah's approach outlined here if the outline does it justice. Particularly point #5: Homosexuality is a much smaller problem for the Church than heterosexual pornography, infidelity, and divorce. Much better than what the culture warriors and, for instance, Fr Josiah Trenham, seem to say. Also point #7: The bigger problem is people judging each other, gossiping about other people’s sins, and causing a lot of hurt. (A lot said on this.) See, by way of contrast, any discussion about Mark Stokoe in the last six months by anybody involved with AOI, OCA Truth, etc.

One thing I'm very curious about...

Is why I get google hits for "mr gzt" on this page. Okay, I know why they end up here, I'm flummoxed as to why people google "mr gzt". I don't sign off as that very often, in most places I'm just plain "gzt". Even if I did sign off as that, why would people google it? On most web-logs, I even put a link to this web-log when commenting, so there's no need to google. Most of my hits come from the venuleius site, by the way. I was curious as to whether people were clicking on my comment links or the links on the site itself, so I made the comment links point at my extremely boring and narcissistic chess site. I'm not linking to the venuleius site because I don't find it particularly helpful.

I would also just say that not informing on people is a fundamental aspect of interpersonal relations. I'm thoroughly disappointed whenever I hear of people "snitching" to their priest about gossip or somesuch.
Posted by Mr. G. Z. T. at 15.8.11 No comments: