converts should be neither seen nor heard

After seeing a particularly embarrassing performance from a web-logger who has barely toweled off from his baptism, I want to take a moment to remind the internets that converts should be neither seen nor heard, at least until their initial enthusiasm has worn off. Also, please resist the urge to baptize your political leanings, at least until, again, until you're dry. I mean, I have strong leanings in support of the poor, the desperate, the destitute, the aliens, and the widows, but I'm not about to pretend that my religion is dictating this concern. So I ask the same courtesy when you want to be a useful idiot for the capitalist class. At least until you've been Orthodox for a few years.
Posted by Mr. G. Z. T. at 26.4.14 4 comments:


I've been forced, as a matter of course, to look at a lot of church choral music lately and that has made me keep track of names. Having people in the 20th century isn't so surprising, even in such an allegedly "conservative" church as this. More Kastalsky! More Chesnokov! But I was rather surprised that somebody with so many familiar pieces was so relatively recent. I mean, that's recent enough to light a candle for him as he makes his way through Purgatory the Toll-Houses.
Posted by Mr. G. Z. T. at 25.4.14 No comments:

The first is that "Agape Vespers" always makes me think of the Evlogitaria:

The angelic host was filled with awe,
when it saw You among the dead.
By destroying the power of death, O Savior,
Thou didst raise Adam, and save all men from hell!

But that's a different "agape".

The other pun, perhaps more obscure, was a response to this comic, which was posted on facebook with the caption, "Oggi ci comporteremmo così con la Resurrezione?" 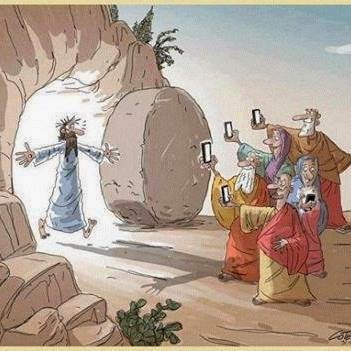 That was a lot of work. It's tough being in the choir in a normal parish, but when you're in a new mission with, like, 20 people and no experienced choir geeks (and no copy of the SVS Pascha book), it definitely takes its toll. They say the one who sings prays twice, this must surely be the truly Orthodox praying thrice.
Posted by Mr. G. Z. T. at 20.4.14 No comments: